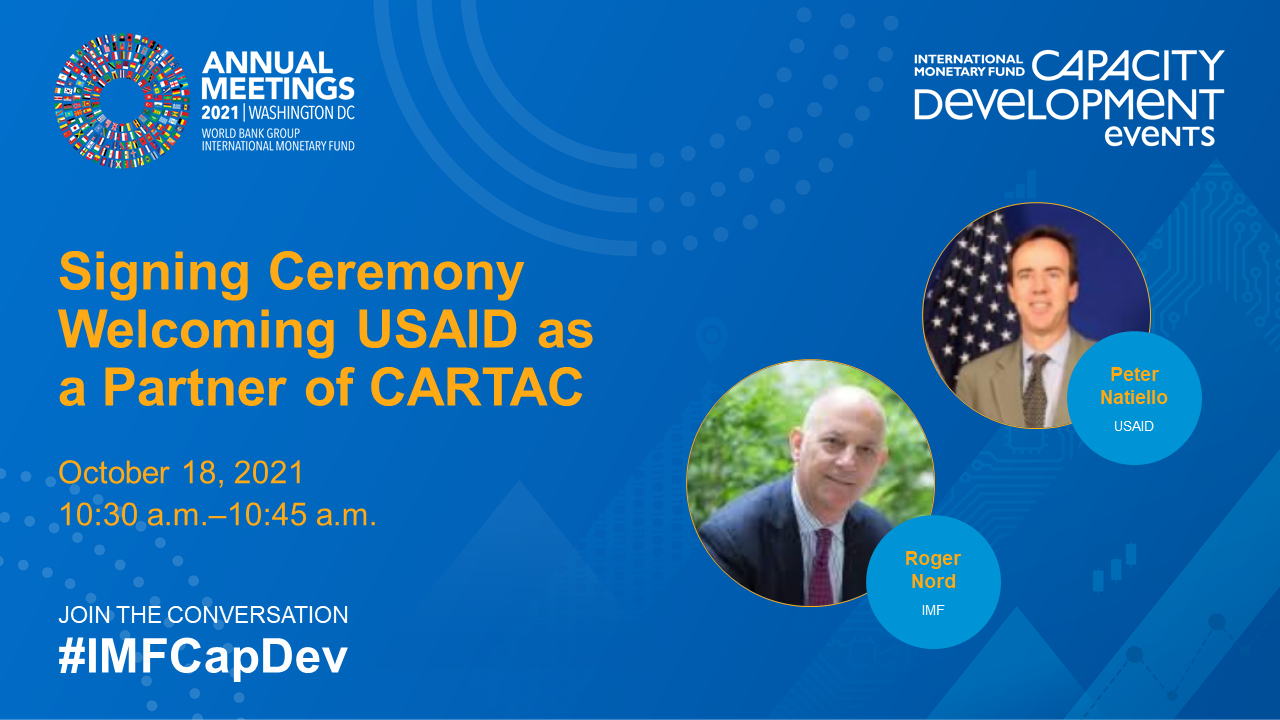 The IMF hosts a signing ceremony welcoming the U.S. Agency for International Development (USAID) as a development partner of its Caribbean Regional Technical Assistance Centre (CARTAC). Together, we will foster inclusive growth in the region, including by supporting resilience to natural disasters and gender equality. This ceremony follows the official announcement, in February 2021, that the United States was joining the IMF’s Pacific Financial Technical Assistance Centre (PFTAC) as a development partner.

From August 2009 through July 2011, Mr. Natiello served as USAID’s Senior Development Advisor to the United States Special Operations Command (USSOCOM), in Tampa, Florida. During his tenure at USSOCOM, he deployed twice to Haiti to assist with coordination of U.S. Government earthquake response. Mr. Natiello was awarded the Joint Civilian Service Commendation medal for his service at USSOCOM.

Mr. Natiello managed USAID’s democracy/governance and conflict mitigation portfolio in Ecuador (2001- 2003), and served as a Democracy and Governance Officer in South Africa (1997-2001). He began his career with USAID in Bolivia, where he served as a Project Development Officer from 1992 to 1997. Prior to joining the Foreign Service, Mr. Natiello served as a Peace Corps Volunteer in Ecuador and subsequently as a Research Analyst with the Inter-American Development Bank in Washington. He is fluent in Spanish and proficient in Portuguese.

Mr. Natiello has a Bachelor of Arts degree in Political Economy from Colorado College and a Masters of International Affairs from Columbia University.

Currently Deputy Director of the IMF’s Institute for Capacity Development, he oversees the IMF’s global partnerships. Since May 2018, he also co-chairs the joint World Bank-IMF Debt Management Facility. Previously, he was Deputy Director of the IMF’s African Department, responsible for country operations in East Africa and francophone West Africa and oversight over the IMF’s network of resident representatives in sub-Saharan Africa. He also led the work on debt and public finance issues in Africa, and was responsible for the IMF’s relations with China regarding Africa. Among his publications, he co-authored A Rebalancing Act for China and Africa: The Effects of China’s Rebalancing on Sub-Saharan Africa’s Trade and Growth (2017) with Wenjie Chen, and was the lead author of Tanzania – The Story of an African Transition (2009). Before joining the African Department, he was advisor to IMF Managing Director Horst Köhler and the IMF’s regional representative in Central Europe. He is a graduate of the University of St. Gallen, Switzerland, and of the University of Chicago.