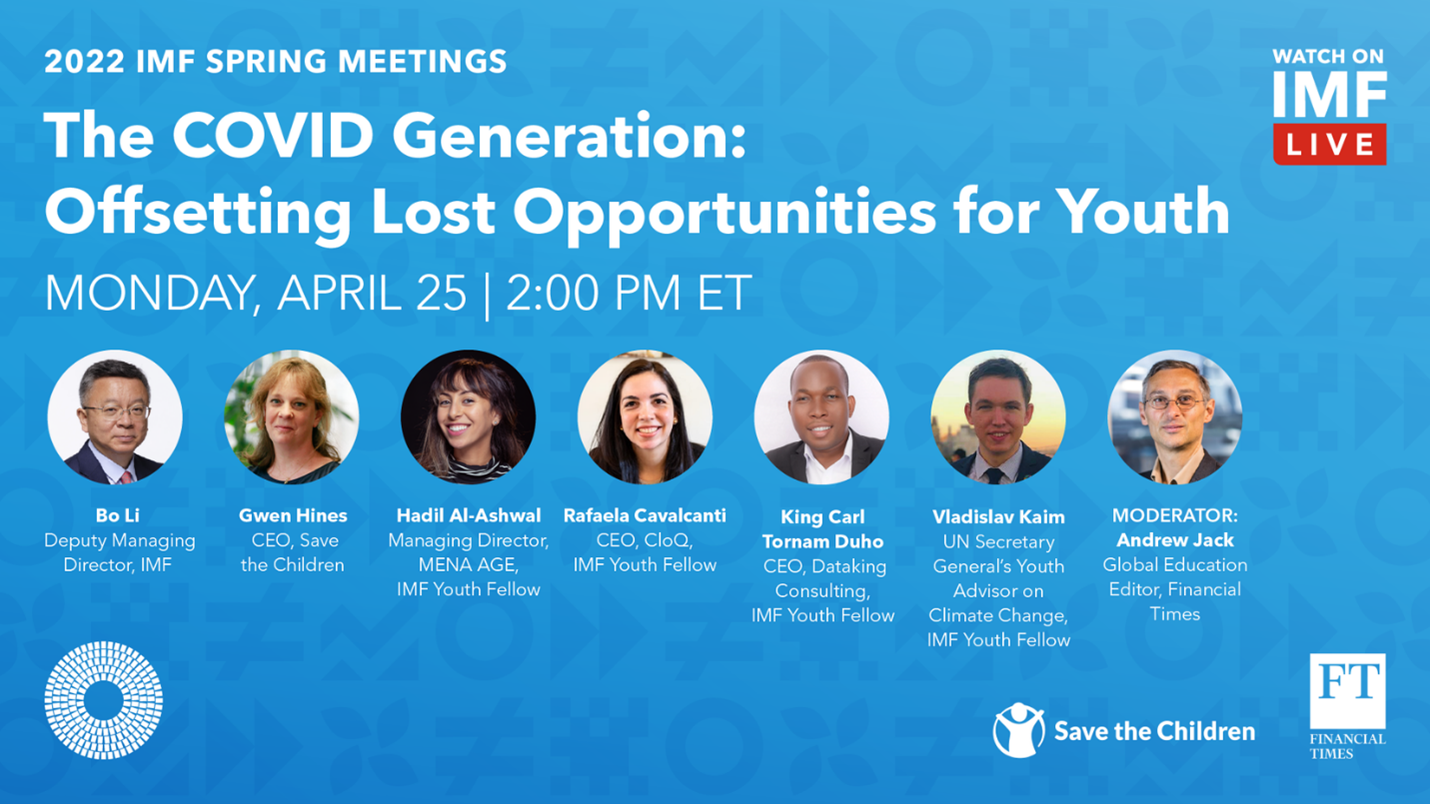 What issues resonate with youth globally? Join the discussion with IMF Youth Fellows on various actions to offset the economic impact of the pandemic and the war in Ukraine on youth.

Before joining the IMF, Mr. Li worked for many years at the People’s Bank of China, most recently as Deputy Governor. He earlier headed the Monetary Policy, Monetary Policy II, and Legal and Regulation Departments, where he played an important role in the reform of state-owned banks, the drafting of China’s anti-money-laundering law, the internationalization of the renminbi, and the establishment of China’s macroprudential policy framework.

Gwen Hines (CEO, Save the Children) was appointed CEO of Save the Children in July 2021, after having joined the charity in 2018 as Executive Director of Global Programmes in March 2018. She has worked in international development for 20 years, most recently as International Programmes Director at the Department for International Development (DFID), where she led the Multilateral Development Review, benchmarking 41 organisation and identifying areas for improvement.

Prior to that she was UK Executive Director for the World Bank Group (2012-2015), where she helped to broker major reforms to the Bank's procurement and evaluation policies and provided oversight of Britain's $5bn funding. Gwen has also held the post of Country Director for DFID in Bangladesh and Malawi, and she has played a variety of strategic roles shaping the UK's engagement with Africa through the G8, DFID's strategy on HIV/AIDS, and approaches to EU enlargement.

Rafaela Cavalcanti (Brazil) stands out for her dedication to create positive social impact. She is the founder and CEO of CloQ, which offers access to nano-credit to the low-income people in order to build a credit history that can be used to (re-)include them in the financial system. Rafaela is a United Nations SDSN Youth Leader, a fellow at both IMF and Cartier Women’s Initiative.  Rafaela holds an MBA from the VU Amsterdam, Netherlands, and a Bachelor of Business Administration from UFPE, Brazil. She also pursued the Social and Impact Entrepreneurship executive education from INSEAD, one of the world’s leading business schools.

Vladislav Kaim (Moldova) is a young economist and climate action and sustainability advocate with vast experience at the UN level, as well as on multiple national and local platforms in Eastern European region. His main fields of advocacy have been green jobs for youth, just transition, green and sustainable economic growth and reforms to the multilateral climate finance agenda. From July 2020, UN Secretary General Antonio Guterres appointed Mr Kaim to be one of his seven Youth Advisors on Climate Change and oversee the implementation of his Climate Strategy. Vladislav is also the contact point on green jobs at YOUNGO, official youth constituency to the UNFCCC, and 2021 IMF Youth Fellow. He is the holder of the 2015 Best Moldovan Student in Diaspora distinction and 2021 finalist of the Swedish King’s Scholarship for Value-Based Leadership.

King Carl Tornam Duho (Ghana) ACMA CGMA is a finance and economic professional with more than 6 years of experience in the private sector, academia and public policy space. King consulted for UNICEF, Plan International, GIZ, AERC, and the Royal Netherlands Embassy. He is Technical Advisor for the research lab of the youth-led Dataking Consulting. He has volunteered for youth-based institutions like the UN SDSN Youth and the Global Citizen Year Academy. King holds a Master’s degree and is currently completing an internship with UNCTAD. He authored more than 20 peer-reviewed journal articles and is committed to addressing international development issues.

Hadil Al-Ashwal (Yemen) is the Founder & Managing Director of MENA AGE, an organization that advocates for gender equality in the MENA region. She also is an M&E Consultant at the World Bank and Socialsuite. Hadil has experience in leading advocacy initiatives on gender equality, delivering capacity-building trainings on gender mainstreaming, women’s empowerment, and projects M&E. Hadil holds an MBA from Cardiff Metropolitan University where she was selected as a representative, exemplary woman at Cardiff Metropolitan University to inspire others.

Andrew Jack (Financial Times) is global education editor for the Financial Times, writing on educational issues around the world and editorial lead for the free FT schools programme. He was previously head of curated content, deputy editor of the big read section, pharmaceuticals correspondent, and a foreign correspondent in France and Russia.

The challenging and complex global economic environment, driven by the significant health and economic impact of the pandemic and war in Ukraine, have had serious ramifications for young people. The discussants focused on the various actions that can help offset the impact of these developments on youth.

“It is the great aspirations and ideas of young people, like you, that give us hope that we will move forward and make our world better for all” DMD Bo Li

“We owe it, as those of us who are older, to the next generation, to listen to them and help build a better future” Gwen Hines